Teacher Of The Year 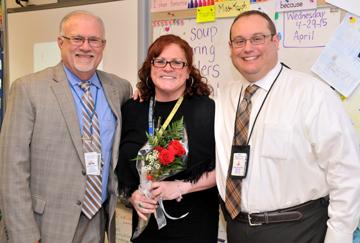 Sandra “Sandy” Krugh, a first grade teacher at W.B. Simpson Elementary School in Camden, has been named Caesar Rodney School District’s Teacher of the Year for the 2015-2016 school year.

With 23 years of teaching experience, Sandy received a Bachelor of Science degree in Special Education and Elementary Education from Slippery Rock University in Pennsylvania, and a Master of Arts in Liberal Studies from the University of Delaware. Following her graduation from Slippery Rock in 1992, Sandy began teaching at the Kent Intensive Learning Center at Simpson Elementary. She then transferred to Lake Forest North Elementary School before returning to Simpson Elementary in 2007.

When asked what factors influenced her to become a teacher, Sandy replied, “I think it was just always something that I wanted to do.  During my freshman year at Slippery Rock, I volunteered to be a buddy at our Special Olympics Soccer Tournament.  I was paired with two young boys that had been abused by their parents and were now living with their adoptive parents.  I was surprised to learn that not all special needs can be seen from the outside.  It is a lesson that has stuck with me every day of my career.”