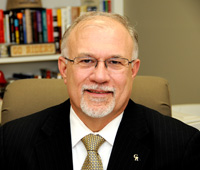 Dr. Kevin R. Fitzgerald serves as the tenth Superintendent of the Caesar Rodney School District. His career in education began in Maryland in 1978 as a Social Studies and English teacher. Football coach, basketball coach, baseball coach and high school Athletic Director are also positions he held proudly. After 13 years in the classrooms of the Dorchester and Caroline County school systems, Dr. Fitzgerald moved to Delaware becoming Caesar Rodney High School’s assistant principal in 1991. In 1998 he became the principal of the High School and served in that role until 2007, when he was selected as District Superintendent.

Dr. Fitzgerald holds a Doctorate of Educational Leadership from the University of Delaware (2002), a Master of Arts from St. John's College (1985) and a Bachelor of Science degree from Frostburg State University (1978). His list of awards are numerous and include recognition as the Delaware Superintendent of the Year for 2012 and 2020; National Superintendent of the Year for 2018; Delaware Secondary School Principal of the Year for 2003; and the University of Delaware’s Commitment to Educational Excellence Award in 2003 and 2008. The St. John’s College Alumni Association recently recognized him with their 2020 Award of Merit. Additionally, he has authored many articles for national educational magazines and contributed to the book Best Practices of Award Winning Secondary School Principals.

During his tenure as Superintendent, Dr. Fitzgerald has made mental health, inclusion and acceptance a top priority for the District and works each day to see that every student gets to meet him and know that he cares about their education. Under his leadership the District and individual schools have received multiple recognitions, including six National Blue Ribbons, two National Green Ribbons, and an ESPN Top Five Special Olympics Banner. Additionally, Dr. Fitzgerald has played a significant role in new construction or renovation projects at every school in the district. He is also recognized as the driving force behind implementing the first Chinese Immersion curriculum in the state.

Dr. Fitzgerald resides in Camden with his wife, Linda. They have three daughters who are all graduates of Caesar Rodney High School.